Unable to pull myself away from the epic horror DOWN BY THE RIVERSIDE, I have had a slow weekend on NPD. Although I am developing my sculpting skills making marquettes (models) for Hogspot and Trixie.

****
TRIXIE
Trixie is a 13 year old Elf. She has worked in the factory for over a year now. She has black hair kept in two ponytails, and a short fringe, which she constantly tries to tuck behind her ears. She is shy, tired and constantly nervous. Her backstory will be told in the North Pole Deception.

HOGSPOT
HOGSPOT is an upper class factory owner who moved from America to the North Pole in the great Christmas Decoration boom of the early 1990’s. He is a greedy man but is also a “nice guy” according to his business partners. He thinks he is a nice boss, and blames the workers low wages on market demands, with low unit prices established by the Clause conglomeration. He often thinks the elves are trying to scam and steal from him, apart from the gun slinging security elves on the front doors. HOGSPOT has agreed to speak with us and let us film in his factory, because he thinks that the documentary is about his entrepreneurial genius.

MIETTE
Miette is almost 16, and works with Trixie in the workshop. She wears a big white scarf, and has brown dreaded hair, which hangs down over her shoulders. Miette is the older, more intelligent and confident of the girls.
****

In other news, I am betrothed [engaged] to the beautiful Marama K! (pictured below). We are currently considering the probability of an engagement party. :) 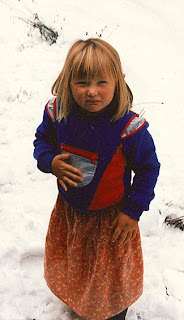 [We also saw Ian Mackaye's band The Evens last night which was a rockin good time!]
Email ThisBlogThis!Share to TwitterShare to FacebookShare to Pinterest 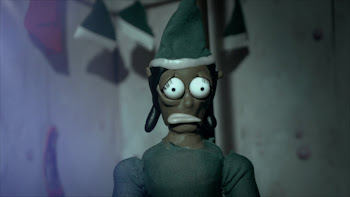 For centuries, Santa Clause has been climbing down chimneys, delivering gifts to children on Christmas. Little has been known about the origin of these gifts until now.

In 2009, film maker Joe Hitchcock went to the North Pole to document the lives of the workers at Clause Industries, living in one of the coldest places on earth.

The North Pole Deception is an up close and personal account portraying the issues of factory workers, a factory manager, and a homeless activist living off the streets.

With the exclusive help of the Elf Liberation Front, this is a shocking insight to elfish society, exploited by western greed in the coldest place on earth.